ALL THE NEWS HERE : https://www.facebook.com/Tartofficial
And follow us on Twitter: @hellstrawberry @bnokj
Posted by Ludovic Sallé at 11:27 PM No comments:

LONDON Comic Con arrives in 7 days!
The Hell Strawberry adventures in a 116 pages Comic Book, for the first time in english language!
And the TART first three issues on a new 100 pages edition!
I hope you'll enjoy them.

See you soon in London! 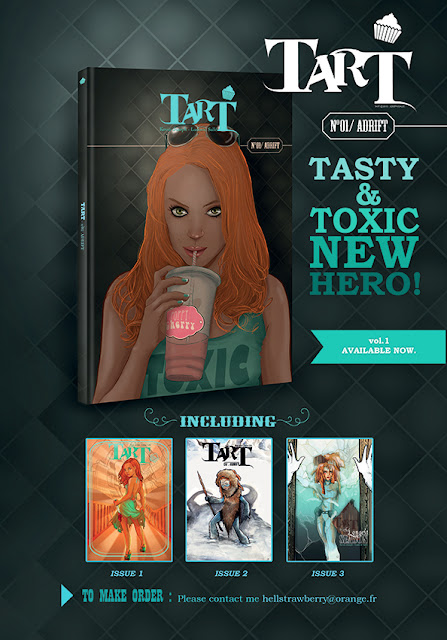 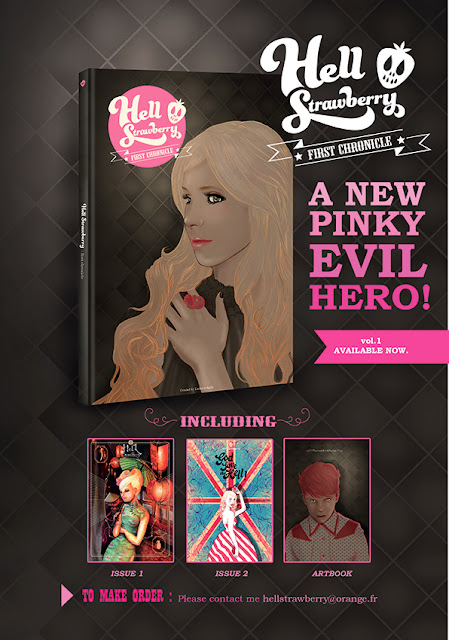 Posted by Ludovic Sallé at 4:52 AM No comments:

Getting the word out about a brand new comic with two unknown creators is more than an uphill battle. There are worse jobs in the world (ditch digger, roof tarrer, Kim Jong Un's food-taster), but it definitely isn't easy. And like every other comic creator out there, Ludo and I feel that if we could just get people to read Tart, they'd love it.

And we've got some people to read it. And most who've read it have told us they love it. Now we don't quite believe our moms' opinions, but we believe the rest of you like it on its merits.

But last week at Megacon was a huge eye opener to me. It was nearly impossible to get anyone to even look at our book in artist alley. And with an eye toward success, we have sent some emails back and forth across the Atlantic discussing some possible solutions.

And sometimes you have to take one step backward before you can take two steps forward.

With that said, Ludo and I have come to the difficult decision of splitting from What the Flux Comics. We have some ideas we're thinking of implementing that do not align with WTFC's philosophy. And instead of asking them to bend to our ideas (Heck, we don't know if they'll work, or at some level even what they are, so how can we ask them to change the way they do business to accommodate us?), we're going to make a clean break.

Which leaves us in a bit of a quandary. With issue 4 just off the presses, and pre-ordered copies still undelivered, what do we do. The people at WTFC, (still our friends) have agreed to continue to sell the book under the WTFC banner for the entire month of April. After that, Tart will be unavailable in a physical format for an unknown amount of time. So please, please, please... if want a copy of Tart go to www.whatthefluxcomics.com/webstore.php and order a copy. They still have a great deal on Vol 1 combined with issue 4 so you can have first printings of all the Tart books published by WTFC (which might become collectors items as we've sold in the low 100s so far).

And since we still love them at WTFC, please feel free to pick up a copy of "Red Angel" (who's author Erin Pyne was a godsend at MegaCon helping sell one of the few copies of Tart we were able to move), "The Grove" which is a promising looking title starring animals that have experienced genetic experiments trying to survive in a post nuclear holocaust world populated by murderous mutated humans, and my favorite "Mac And Trouble" which is a humor mag I read the weekend of MegaCon penciled by Dan Gorman (who was nice enough to give us half his space or else I wouldn't have even been able to spread the word on Tart as much as I did).

"Mac and Trouble" is hilarious. Two cats fall through a wormhole and get a job with a group that fixes glitches in history when they pop up (think an Indy Car suddenly appearing in a Roman chariot race. Better yet, think of it as a parody of Tart even though they didn't know Tart existed when they created it). I can't recommend this book enough. It is silly, cute and often enough, laugh out loud funny.

So spread the word. Tart is Good. But if you want a copy, the time to act is now. After April is over physical copies will not be available until Ludo and I figure out if we're publishing ourselves, submitting to new publishers, kickstarting books or returning to a digital only format.

For now though, Tart's story continues. Issue 5 is being prepped for art. It kicks ass. Issue 6 is scripted. It kicks major ass. Issue 7 is partially scripted, partially in my head. It chills out a little and answers lots of questions (ass kicking commences, but it's definitely a decaffeinated type of ass-kickery).

Ludo and I have a story to tell with Tart. Please help us get through this momentary stutter-step so we can come out as strong, or stronger than ever. 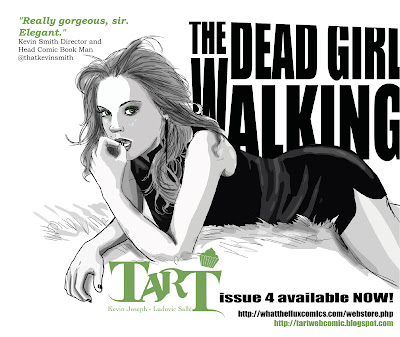 Posted by Ludovic Sallé at 4:08 AM No comments:

I knew a girl who once skipped 6 weeks of high school. Not in total. In a row.

She says her friends wanted to skip a day. So she said sure. Who cares.

Then they had fun. And when you have fun like that you really want to do it again, so they skipped the next day. Well that second day they skipped was Thursday, and if you've skipped Wednesday and Thursday, she and her friends reasoned, why go back on Friday.

Well Monday rolled around and she felt guilty. And her friends did too. If they went in they'd have to explain how they skipped most of the last week. So they didn't go in. All of a sudden it was two weeks of school, and then she said she just couldn't go back. She'd skipped two weeks! How do you explain that?!?

Eventually a cop came upon them and they were brought back to school a month and a half later. She admitted to me that she was so relieved when that happened because it was literally the only way she could go back. She wanted to go back, but couldn't get over the embarrassment of how long it had been since she'd last been to school.

Long story short, I'm a horrible person and I suck at life.

But I do have a tremendous review of Tart # 4 which is coming out in a few weeks (you can preorder at what the fluxcomics.com) from jaybwebb.wordpress.com. So please read that.

And please forgive the fact that I haven't blogged in too long a time to mention.
Posted by KJ at 10:00 PM No comments: 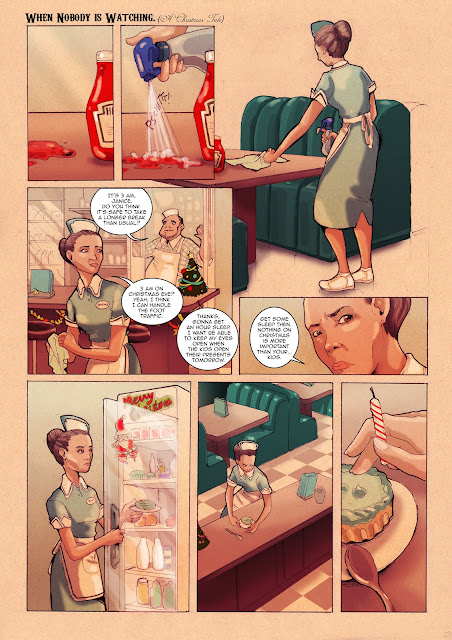 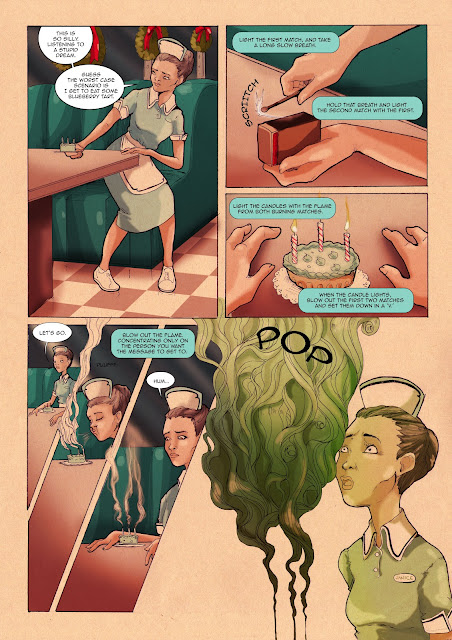 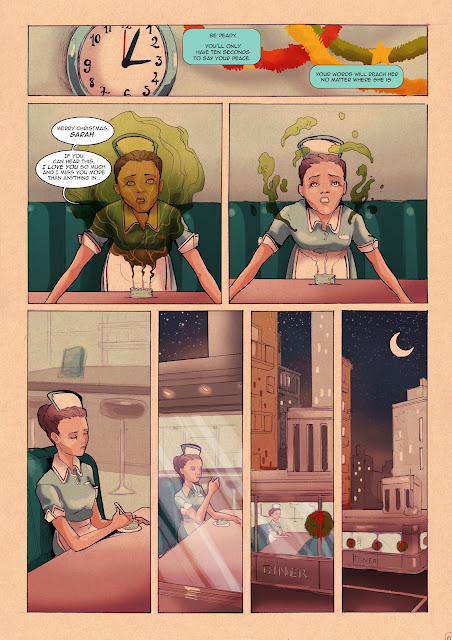 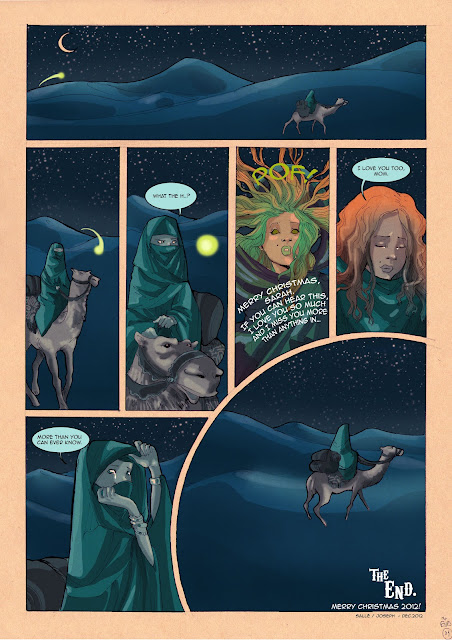 Posted by Ludovic Sallé at 2:33 AM No comments:

What is and isn't Happening, and Why

Been a bit of time since we posted much stuff and that's because we really haven't had good, solid information to post. I wish I could say much of that has changed, but I can't. Instead I wanted to explain why we're sort of stuck in limbo (a lot of it is good stuff, though, so don't worry).

The biggest thing slowing down production is that What the Flux Comics is approaching Diamond Distributors to get Tart (and their other titles) into the Diamond catalog. If you're newer to comics Diamond is the company that distributes comic books to the local comic shops around the world. Getting into the catalog allows shops to order your title as easily as checking a box on an order form.

Without being in Diamond, we will have to meet and establish relationships with every individual shop owner or manager in the country before getting a copy on their shelves. Obviously, a slow and inefficient process. So we've applied, sent in a copy of Tart and Red Angel (the other title What the Flux is applying with) to Diamond and are awaiting a response. Unfortunately, there is no set timetable for an answer.

In the meantime, Ludovic has illustrated a book which will be published in France around Halloween. I've only seen the cover, but just like everything he does, it's simply gorgeous: 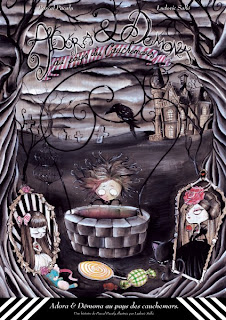 If you want to learn more about the book, check out this site: fan2fantasy.fr/1224
I don't know if they deliver to the States, but if I was a book collector, I'd drop them a line to see. When you have a chance to get a debut book of a talent like Ludo's, in a limited to 250 copies edition, you need to jump on it (By the way, I get nothing from the purchase of this book, so consider this investment advice my civic duty).

Creatively, I've been working on a project outside of the Toxic Universe that I'm pretty excited about. I'll hopefully be able to tell you more about it soon.

With Tart, though, I've been busy preparing for Geekfest this November 18th on Florida Atlantic University's campus. I contacted a marketing company in the hopes of having something that will not only bring a bit of revenue in, but make an impression on people as well. Since we'll be on a college campus, I thought what would be the coolest, most unique product we could have? A 23 oz Tart Beer glass! 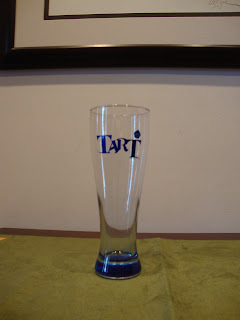 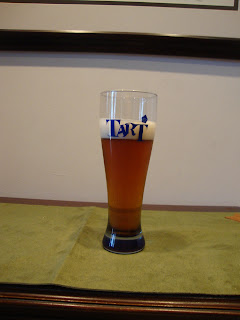 Oh, yeah. Looking good. Anyway, we'll try to sell a few, and barring that, my family can expect to be getting beer glasses for the next 20 or so Christmases. 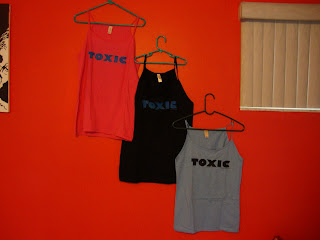 We also put together some women's tank tops. I thought about it for a bit and thought it was a touch early to expect a woman to wear a shirt reading "TART," so we went with "Toxic." Any of you with Tart Volume 1 can turn to the last couple pages of issue 3 to see the comic inspiration for these shirts. 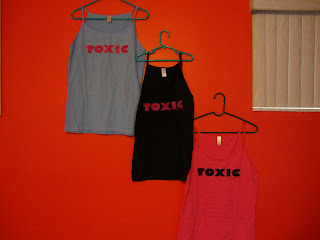 We don't have too many shirts, as we were able to order them 1 by 1, so I'm hoping my family doesn't have to also receive tank tops for the holidays. My brother doesn't look good in pink.

And lastly, we're investigating printing out 200 or so copies of issue 1 which will be given away free at the door of Geekfest. We feel like our story is strong enough that getting it into people's hands is the best investment we can make. This isn't set in stone, but I'm really hoping it happens. 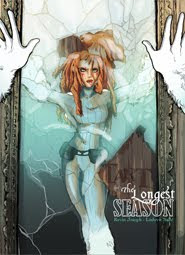 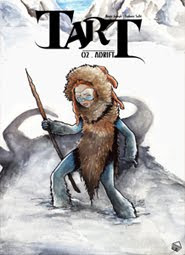 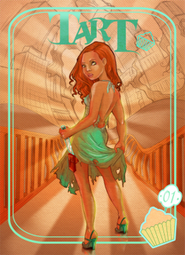